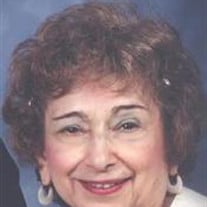 Olga F. Nesti, 92, of N. Belle Vernon passed away Friday, November 1, 2013 in Thorpe’s Personal Care Home. A daughter of the late John and Maria Sebastiani Imperatore, she was born in Canonsburg on October 31, 1921. She was a member of St. Sebastian Roman Catholic Church of Belle Vernon, the C.D. of A, Court 1522, the Friends of the Veterans and was a member and past treasurer of the Annita Garibaldi Society. A resident of Belle Vernon since 1946, Olga had been employed at Zelenski’s Bridal Shop for over 50 years, retiring in July 2012. She enjoyed frequent trips to the Meadows and loved hosting her friends in her home. Survivors include two daughters and sons-in-law, Cynthia and George Malega and Pamela L. Nesti and Robert Kostella, all of Belle Vernon, two brothers and sisters-in-law, John and Mary Imperatore and Harry and Irene Imperatore, all of Canonsburg, a granddaughter, Melissa Kostella and her fiancé Jeremy Susanek and a good friend, Gilda Marasco of Belle Vernon. In addition to her parents, she was preceded in death by her husband, Romo ‘Bud’ Nesti on August 1, 2003, one sister, Jean Tomsic and five brothers, Lee Barret Imperatore, James Imperatore, Quirino ‘Goody’ Imperatore, Albert Imperatore and Erman Imperatore. Friends will be received 2 to 9 P.M. Monday in the Ferguson Funeral Home and Crematory, Inc., 700 Broad Avenue, Belle Vernon. www.FergusonFuneralHomeAndCrematory.com 724-929-5300 A blessing service will be in the funeral home Tuesday at 9:30 A.M. followed by a funeral mass at 10 A.M. in St. Sebastian R.C. Church with Rev. Msgr. Roger Statnick as celebrant. Entombment will follow in Belle Vernon Cemetery. The rosary will be prayed in the funeral home at 3 P.M. Monday led by members of St. Sebastian Parish followed by an Annita Garibaldi Society Service at 3:15 P.M.

Olga F. Nesti, 92, of N. Belle Vernon passed away Friday, November 1, 2013 in Thorpe&#8217;s Personal Care Home. A daughter of the late John and Maria Sebastiani Imperatore, she was born in Canonsburg on October 31, 1921. She was a member... View Obituary & Service Information

The family of Olga F. Nesti created this Life Tributes page to make it easy to share your memories.

Send flowers to the Nesti family.