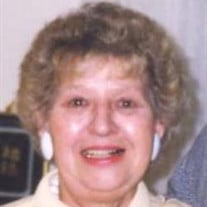 Pauline Stewart Rabe, 85, of Donora, died on Wednesday, February 12, 2014, in Mon Valley Hospital. She was born on July 21, 1928, in Donora, a daughter of the late Michael and Pauline Kollar Gaydos. Mrs. Rabe was a 1946 graduate of Donora High School. Upon graduation she worked as a legal secretary and later, with her husband, James W. Stewart, who operated Donora Water Heater Company. She is survived by three sons and their families, J. Scott Stewart and Debra of Ossining, NY, William M. Stewart and Tami of Greensburg, and Robert R. Stewart and Kathy of Richland, PA. Also surviving are eight grandchildren, Kevin, Maggie and her husband Scott Neal, Brett, Paige, Benjamin, Olivia, Maxwell and Mitchell Stewart. For more than 45 years she was a member of the First Methodist Church of Donora before its closing. She is now a member of the First United Methodist Church of Monongahela. Also, surviving are brothers, Robert M. and LaVonne Gaydos of Turnersville, NJ, Richard A. and Ann Gaydos of Donora, sister Mary Ann Wentz of Donora, and sister-in-law, Dorothy H. Gaydos of Carroll Twp., special relatives Dolores and George Petrisin and Dollie and George Stewart all of Rostraver Twp. and many nieces and nephews. She enjoyed needlework, cross-stitching and golf. In addition to her parents, she was preceded in death by husband, James W. Stewart in 1982. In 1986 she married James A. Rabe who died in 2005. Also preceding her in death were her brothers, Cornelius W. Gaydos in 1997 and Michael Gaydos who died in infancy. The family requests in lieu of flowers, memorial contributions be made to Juvenile Diabetes Research, 960 Penn Avenue, Suite 1000, Pittsburgh, PA 15222. A memorial service will be held on Saturday, March 8, 2014, at 11 a.m. in the Ferguson Funeral Home and Crematory, Inc., 700 Broad Avenue, Belle Vernon (724)-929-5300. www.FergusonFuneralHomeandCrematory.com Jean Ferguson will be officiating. Interment will be in Mon Valley Memorial Park.

Pauline Stewart Rabe, 85, of Donora, died on Wednesday, February 12, 2014, in Mon Valley Hospital. She was born on July 21, 1928, in Donora, a daughter of the late Michael and Pauline Kollar Gaydos. Mrs. Rabe was a 1946 graduate of Donora... View Obituary & Service Information

The family of Pauline Stewart Rabe created this Life Tributes page to make it easy to share your memories.

Send flowers to the Rabe family.