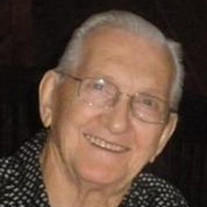 Perry Schwartz, 91, formerly of Monessen, died peacefully on November 23, 2014 at St. Barnabus Nursing Home, Gibsonia, with his loving wife Helen at his side. Born Albert Perry Schwartz in Belle Vernon on November 24, 1922 to Louis and Lillian Swartz, he had two sisters, both now deceased: Louise Wolfe (husband George) and Katherine "Kass" Altpater (husband Clint). Perry graduated from North Belle Vernon High School in 1940 where he was a standout basketball player. As an undergraduate at California State Teachers College (now California University of Pennsylvania) he continued to star in both basketball and tennis. In 1943 he attended the Naval Officers Training Program at Bloomsburg State College, PA, and then served his country as a Naval officer in the Mediterranean during World War II. Upon his return from active duty, he taught math and coached football at North Belle Vernon High School for several years before starting his own business, Standard Physicians Supply Company, which he and Helen ran as a successful family business. Perry took a genuine interest in people and had a great sense of humor- one couldn't be near him for very long before being engaged in friendly conversation. He will be remembered by many as a great friend; giving his time and talent to many charitable organizations and causes. He was an active member of the Belle Vernon Lion's Club for over 40 years, chairing countless events and committees and serving multiple times as President. He also served as President of the Monongahela Valley Country Club, where he was a long-time member and a regular on the golf course. After moving his family to Monessen, Perry joined the Monessen Elks Lodge #773, as well. Following his retirement in 1987, Perry became more involved with the veteran's organization, 'Mon Valley Shipmates' , often donning his uniform to participate in parades and community events. And he finally had time to complete the lyrics to a love song he started composing many years before in Naval Training School, titled "You're Always the Girl in My Dreams." Perry is survived by his devoted wife Helen and three children: Patricia Henriquez (husband Jack) of Allentown, PA, Debra Achen (husband Donn) of Monterey, CA, and Tracey Deal of Poway, CA. He is also survived by two grandsons and four great-grandchildren: Eric Henriquez (son Jack, and daughter Emerson), and Ryan Henriquez (wife Jennifer, twin daughters Harlow and Roma). Friends will be received 12 Noon to 2 P.M. Saturday, November 29, 2014 in the Ferguson Funeral Home and Crematory, Inc., 700 Broad Avenue, Belle Vernon. 7214-929-5300 www.FergusonFuneralHomeAndCrematory.com A blessing service will be in the funeral home at 2 P.M. Saturday with Rev. James Bump officiating. Entombment will follow in Belle Vernon Cemetery. The members of the Mon Valley Shipmates will meet in the funeral home Saturday at 1 P.M. to conduct a Two Bell Service. In lieu of flowers, donations can be sent to the Belle Vernon Lion's Club, 435 Speer Street, Belle Vernon, PA 15012.

Perry Schwartz, 91, formerly of Monessen, died peacefully on November 23, 2014 at St. Barnabus Nursing Home, Gibsonia, with his loving wife Helen at his side. Born Albert Perry Schwartz in Belle Vernon on November 24, 1922 to Louis and Lillian... View Obituary & Service Information

The family of Perry Schwartz created this Life Tributes page to make it easy to share your memories.

Send flowers to the Schwartz family.