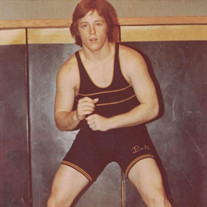 Rande J. Stottlemyer, 62, of Charleroi went to be with the Lord on January 28th, in his home, surrounded by his family after a long battle with Early Onset Alzheimer’s. A son of the late Kenneth and Betty Magnus Stottlemyer, he was born in Glendale, West Virginia on February 24, 1955. Rande attended The Bible Chapel of South Hills and loved wrestling, hunting, fishing, and being a dad. He graduated from the University of Pittsburgh in 1978 with a BS degree in Physical Education and was also the wrestling coach for the University of Pittsburgh from 1978 until his retirement in 2013. Fondly known as ‘Coach’ by the thousands of wrestlers he coached at Pitt, camps, and clubs, Rande was a 2-time Jr. National Freestyle Champion, and a 3-time NCAA All-American. Rande served in several offices including President of the National Wrestling Coaches Association, and Chairman of the Division I NCAA Rules Committee for wrestling. Survivors include his wife of 35 years, Regina (Carson) Stottlemyer; four daughters and three sons-in-law, Tara Stottlemyer at home, Rebecca (Rick) Bergstedt of Swansboro, NC, Jaclyn (Daniel) Royall of South Strabane, and Kelsey (Jesse) Pust of Fallowfield Township; three brothers and sisters-in-law, Dr. Keith (Sarah) Stottlemyer of Riverside, CA, Ken (Sandee) Stottlemyer of Hermitage, and Rex (Caroline) Stottlemyer of Virginia Beach, VA; and one sister, Jan Stottlemyer of Tequesta, Florida. . In addition to his parents, he was preceded in death by a son Sean in 1983 and a sister-in-law Susan in 1997. Friends will be received Thursday and Friday in the Ferguson Funeral Home from 2:00 P.M. - 8:00 P.M., 700 Broad Avenue, Belle Vernon www.FergusonFuneralHomeAndCrematory.com (724) 929-5300 and at The Bible Chapel Saturday from 9:00 A.M. - 11:00 A.M., 300 Gallery Drive, McMurray. Funeral Services will be held at The Bible Chapel at 11:00. Interment is private. In lieu of flowers, memorial contributions may be made to Alzheimer’s Research.

Rande J. Stottlemyer, 62, of Charleroi went to be with the Lord on January 28th, in his home, surrounded by his family after a long battle with Early Onset Alzheimer&#8217;s. A son of the late Kenneth and Betty Magnus Stottlemyer, he was born... View Obituary & Service Information

The family of Rande J. Stottlemyer created this Life Tributes page to make it easy to share your memories.

Rande J. Stottlemyer, 62, of Charleroi went to be with the Lord...

Send flowers to the Stottlemyer family.