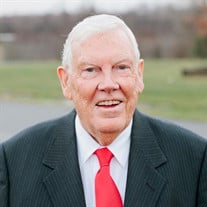 Regis "Rege" James Laughlin, age 85, passed away peacefully at home in the loving care of his family on Monday, April 20, 2020. A lifelong Pennsylvanian, Rege was born on May 23, 1934 in Aliquippa. As the youngest of six children, Rege was the first of his family to pursue a college education following his 1953 graduation from Ambridge High School. While majoring in social studies and education at Indiana State Teacher’s College, Rege was a standout basketball player at 6 feet 4 inches. His college record for free throw shooting stood uncontested for decades. Following graduation in 1957, Rege joined the teaching staff at Gateway Senior High School in Monroeville where he taught World Cultures and coached varsity basketball. In his role as Coach Laughlin, he used his motivational gifts to develop his players’ character and work ethic, leading them to several tournament championships. After earning his Master's in Education from Indiana State Teacher’s College, Rege was elected to serve the Gateway teaching community as president of the Gateway Education Association (GEA) where he negotiated contracts and represented the interests of his fellow educators before the school board. Stimulated by involvement in the political processes, Rege was active in PACE, the Political Action Committee For Education to lobby for legislation beneficial to the field of education. Even after his retirement from teaching in 1994, Rege’s inspirational leadership skills were called upon again as he was elected to serve as president of the Pennsylvania State Education Association (PSEA) Retired where for ten years he traveled across the state making speeches, problem-solving, and serving the interests of those who had spent their careers as educators. Rege was appreciated as an accomplished and thoughtful toastmaster who could bring a laugh to his audience with his easy connective style. Gateway Sports Hall of Fame recognized Rege for his outstanding leadership and inducted him as one of their honored coaches in November of 2013. In attendance were numerous former players, now professionals in their respective fields, each expressing their gratitude to their beloved Coach Laughlin for his devotion to their personal development and his contribution to their successes. A lifelong learner, one of Rege’s great joys was the stimulation of traveling the world with his wife Harriet. After retirement, Rege enjoyed the satisfaction of exploring many regions of the globe about which he had taught in the classroom. Highlights were cruises along ports in Southeast Asia, the capitals of Europe, and relaxing Caribbean islands. A guiding theme in Rege’s life was his looking out for the underdog, supporting the one who needed to find a voice, or seeking resources for the one who was disempowered, perhaps spawned by the lessons he learned from his own growing up years. It influenced his politics and his care for the poor. As an adult he worked with underserved kids to help them set goals and stay out of trouble, he stood up for teachers needing support, and actively advocated for those who were disenfranchised. He passed that quality down to his children and grandchildren who all follow in his footsteps in their own ways. One of his covert pleasures was to smuggle a milkshake or a candy bar into the room of an old friend confined to a nursing home or to a hospital bed. And having been a waiter during his college days, he was one of the biggest tippers around. He saw the person behind the job. Dedicated to family, Rege also experienced great joy in being a father, grandfather, and more recently, great grandfather. When asked the reflective question of choosing anyone in current times or in past history with whom he would like to have dinner, he would consistently respond, “my family”. Whether trips to the zoo, bowling outings, Primanti lunches, miniature golf, or shooting basketball, Rege enjoyed special times with his grandkids. Armed with donuts, fruit, or special treats, he never came empty-handed for a visit. He was loved greatly and will be missed dearly. Rege is survived by his wife Harriet Kram Hoffman Laughlin, his children Leslie Laughlin Pitt (Graham), Brett Laughlin (Janet), Dr. Sherri Laughlin Thomas (Reggie), and Paige Laughlin Burgan (Tim), his grandchildren, Ashley Pitt Merritt (John), Stephanie Pitt Baum (Josh), Robert Graham Pitt, III, Tyler Laughlin (Avery), Elaina Laughlin, Brooke Thomas Sims (Joe), Blake Thomas, Bailee Thomas, Brandon Thomas, Amanda Burgan, Christopher Burgan (Rachel), his great grandchildren, Louise Merritt, Frances Merritt, Wade Merritt, Wallace Laughlin, and Isaac Burgan, nephew Tom Laughlin, Tracey Delgado, and stepchildren Dean Hoffman and Janis Hoffman. He was preceded in death by his stepdaughter Judy Hoffman. Rege’s faith journey was an ever-evolving narrative that developed through the seasons of life. Born into the Catholic faith, he was exposed to the mysteries of the mass and the lives of the saints. Later in life he embraced a personal faith in Jesus Christ as his Lord and Savior and expressed that faith through his care for the lonely and his ongoing prayers for his children and grandchildren. He reassures them that this next step of his journey is not goodbye—that as believers in Christ we share the assurance that we will meet together again in heaven for the greatest of reunions. The immediate family will grieve together and will not be conducting a service. They welcome the sharing of thoughts and memories via the online mechanisms available or through cards to the family. Arrangements have been entrusted to the Ferguson Funeral Home and Crematory, Inc., 700 Broad Avenue, Belle Vernon. 724-929-5300. www.FergusonFuneralHomeandCrematory.com. In lieu of flowers, the family requests any memorial gifts be sent to benefit underserved children through the reading and tutoring program of Full Potential Project at 130 Charity Lane Rostraver Township, PA 15012.

Regis "Rege" James Laughlin, age 85, passed away peacefully at home in the loving care of his family on Monday, April 20, 2020. A lifelong Pennsylvanian, Rege was born on May 23, 1934 in Aliquippa. As the youngest of six children, Rege was... View Obituary & Service Information

The family of Regis James Laughlin created this Life Tributes page to make it easy to share your memories.

Send flowers to the Laughlin family.