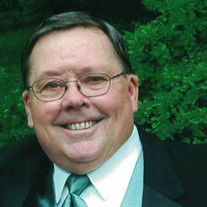 Regis Caldwell Schivley, 74, of Rostraver Twp., went to be with the Lord on Thursday, April 30, 2020 in his home. A son of the late Regis T. and Lois Caldwell Schivley, he was born in Pittsburgh on March 13, 1946. A resident of Rostraver for the past two and a half years, Regis had previously resided in Forward Twp. for 22 years. He was employed as a physical therapist for 40 years, retiring in 2014. Regis was a member of Journey by Grace and the Mon Valley Church, was an avid Pittsburgh Steelers and Pitt football fan, and was a U.S. Army Veteran, serving during the Vietnam War. Survivors include his wife with whom he shared 52 years of marriage, Carolee Williams Schivley; two sons and a daughter in-law, Regis "Jimmy" Schivley at home and Benjamin and Christina Schivley of West Grove, PA; a daughter and son in-law, Catherine and Douglas Bender of Stockdale; seven grandchildren, Nicholas, Luke, Madelyn, Bethany, Samuel, Isabella, and Jesse; and a sister, Dona Kuch of Florida. He also leaves behind his faithful K-9 companion, Mandy. In addition to his parents, he was preceded in death by two sisters, Lois Ann Foister and Mary Catherine Ruby, and a brother, William Schivley. There will be no public services at this time. Burial will be in the National Cemetery of the Alleghenies. Arrangements have been entrusted to the Ferguson Funeral Home and Crematory, Inc. 700 Broad Avenue, Belle Vernon. www.FergusonFuneralHomeAndCrematory.com

The family of Regis Caldwell Shivley created this Life Tributes page to make it easy to share your memories.

Regis Caldwell Schivley, 74, of Rostraver Twp., went to be with...

Send flowers to the Shivley family.