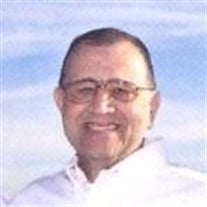 Richard S. Caputo, 73, of Centerville, passed away Monday, November 30, 2015. A son of the late Guido and Millie Reed Caputo, he was born in Bridgeport, CT on November 8, 1942. He was a member of St. Thomas Aquinas Roman Catholic Church, the Sons of Italy in Brownsville and formerly served as the state membership chairman for the PA Athletic Directors Association where he was honored as the Athletic Director of the Year. Richard played football for Bellmar High School, graduating in 1960, and also played for the California University Vulcans. He was the defensive coordinator for the California Vulcans from 1977 thru 1988. Formerly of Fredericktown, he had resided in Centerville since 1986. He was employed as a guidance counselor and athletic director for the Beth-Center School District, retiring in 1994. He received his Master's Degree in Education from Duquesne University. He coached wrestling for 24 years at Beth Center. During his career, he was inducted into the Belle Vernon Area Hall of Fame as a player, California University Hall of Fame as a player and coach, Beth-Center Hall of Fame as a wrestling coach and the PA Sports Hall of Fame as both a player and coach. Survivors include his wife of 51 years, Janet Stewart Caputo, two daughters and sons-in-law, Denise and Fred Fundy of Fredericktown and Jennifer and Steven Utterdyke of Lebanon, OH, four grandchildren, Freddy and Dominic Fundy and Meghan and Jay Utterdyke and three sisters-in-law and one brother-in-law Rose Stewart of Belle Vernon, Dorothy and James Stewart of Monongahela and Alice Caputo of Rices Landing. In addition to his parents, he was preceded in death by a brother, James "Sonny" Caputo. Friends will be received 2 to 4 and 6 to 9 P.M. Thursday, December 3, 2015 in the Ferguson Funeral Home and Crematory, Inc., 724-929-5300, 700 Broad Avenue, Belle Vernon. www.FergusonFuneralHomeandCrematory.com A blessing will be held at 8:30 P.M. Thursday in the funeral home with Rev. Michael Zavage officiating. If friends wish, memorial donations may be made to the family for an Athletic / Academic Scholarship in memory of Richard.

Richard S. Caputo, 73, of Centerville, passed away Monday, November 30, 2015. A son of the late Guido and Millie Reed Caputo, he was born in Bridgeport, CT on November 8, 1942. He was a member of St. Thomas Aquinas Roman Catholic Church, the... View Obituary & Service Information

The family of Richard S. Caputo created this Life Tributes page to make it easy to share your memories.

Send flowers to the Caputo family.