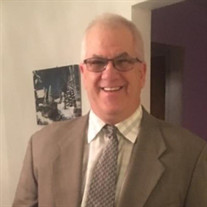 Robert J. “RJ” Sokol, 64, of North Belle Vernon, passed away on Friday, March 26, 2021, in UPMC Magee Hospital after a brave and valiant battle with Covid 19. A son of the late Robert E. Sokol and Jacqueline Bruno Sokol who survives and resides in Rostraver, he was born in N. Charleroi on February 9, 1957. A resident of North Belle Vernon for the past 35 years, he was a member of St. Sebastian Roman Catholic Church, a life member of the Rostraver Central Volunteer Fire Department, and was a former North Belle Vernon Councilman. RJ had been employed at the former Sony Plant for 20 years and most recently at Eastman Chemical in Monongahela as a production supervisor for 8 years. He also was very proud of recently becoming a card dealer at Live! Casino in Greensburg. RJ spearheaded the efforts to clean up the former Graham Street Park, currently Community Bank Park, to make it a better place for families in his community. He spent countless hours raising funds to complete his vision of a valuable community asset. RJ enjoyed horse races, vacationing to Ocean City, loved his Hallmark and cowboy movies, and his cat, Smokey. In addition to his mother, he is survived by his wife of 33 years, Lynn Rusnak Sokol, his ‘Princess’; a loving son, Bobby Sokol of N. Belle Vernon; three brothers and sisters in-law, Carmen “Buddy” Sokol, his twin, of Pittsburgh, Brian and Candy Sokol of Rostraver, and Scott and Paula Sokol of Rostraver; and several nieces and nephews. In addition to his father, he was preceded in death by a sister in-law, K.C. Henninger Sokol. Friends will be received on Saturday from 7 to 9 P.M. and on Sunday from 2 to 4 and 6 to 8 P.M. in the Ferguson Funeral Home and Crematory, Inc., 700 Broad Avenue, Belle Vernon. 724-929-5300. www.FergusonFuneralHomeandCrematory.com. A Funeral Mass will be held on Monday at 12 noon in St. Sebastian Roman Catholic Church. Everyone is asked to go directly to the church. Social distancing and face masks are required in both the funeral home and the church. Interment will follow in Belle Vernon Cemetery. If friends wish, memorial donations may be made in RJ’s memory to the Humane Society of Westmoreland County, 139 Humane Society Road, Greensburg, PA 15601.

Robert J. &#8220;RJ&#8221; Sokol, 64, of North Belle Vernon, passed away on Friday, March 26, 2021, in UPMC Magee Hospital after a brave and valiant battle with Covid 19. A son of the late Robert E. Sokol and Jacqueline Bruno Sokol who survives... View Obituary & Service Information

The family of Robert J 'RJ' Sokol created this Life Tributes page to make it easy to share your memories.

Send flowers to the Sokol family.