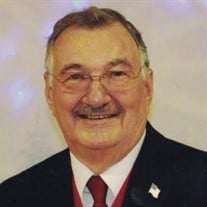 Roger Lind, 77, of Rostraver Twp., went to be with the Lord on Wednesday, May 23, 2018 in Jefferson Regional Medical Center surrounded by his family. A son of the late John and Mary Balogh Lind, he was born in N. Charleroi on November 20, 1940. Formerly of Charleroi, Roger had been a resident of Belle Vernon since 1970 and had attended the Calvary Bible Church in Charleroi. He was passionate about his family and loved his dog, Kady. Roger was a history buff, and enjoyed trips to Gettysburg and Civil War history, riding his bicycle, yard work, and any task that needed done around the house. Roger had been employed by West Penn Power for 39 years, retiring in October of 2002 and served in the National Guard reserves. Survivors include his wife of four years, Bonny McCormick Rabe Lind, two daughters and sons-in-law; Lori and Kevin Barnhart of Fredericktown, and Jennifer and Randy Garofalo of South Park, a son and daughter-in-law, Eric and Shannon Lind of Belle Vernon, two stepchildren; David and Teresa L. Rabe of Grasonville, MD, and Daniel G. Rabe of North Belle Vernon, a brother, John Norman Lind of Rock Hill, SC, 14 grandchildren; Bryce, Jordan, and Grant Barnhart, Kelsey Nicolette, Blake and Brady Herron, Hayley Benning, Parker and Paityn Lind, Jake, Gavin, Chris, and Lindsay Rabe, and Ashley (Sean) Smith, and three great grandchildren; Carter Mariani, Sean Smith, and Mykenzie Smith. In addition to his parents, he was preceded in death by his first wife, Carol Hartman Lind on June 16, 2008 and a brother, Don Lind in 1996. Friends will be received on Saturday from 2 to 4 and 7 to 9 P.M. in the Ferguson Funeral Home and Crematory, Inc., 700 Broad Avenue, Belle Vernon. 724-929-5300 www.FergusonFuneralHomeAndCrematory.com. Funeral services will be in the funeral home at 1 P.M. Sunday with Rev. Glenn Sanders officiating. Interment will follow in Howe Cemetery.

Roger Lind, 77, of Rostraver Twp., went to be with the Lord on Wednesday, May 23, 2018 in Jefferson Regional Medical Center surrounded by his family. A son of the late John and Mary Balogh Lind, he was born in N. Charleroi on November 20,... View Obituary & Service Information

The family of Roger Lind created this Life Tributes page to make it easy to share your memories.

Send flowers to the Lind family.