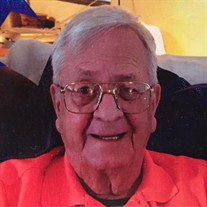 Ronald Anthony "Tex" Zeli, 83, of Belle Vernon, went peacefully to be with the Lord on Wednesday, July 12, 2017. A son of the late Anthony and Mary (Uveges) Zeli, Tex was born in Belle Vernon on June 16, 1934. He was a member of the Holy Resurrection Orthodox Church of Belle Vernon. Tex enjoyed bowling, hunting, playing the ponies and was an avid football and Steelers fan. His greatest joy was spending time with his family and took great pride in his grandchildren. Tex served in the U.S. Army and had formerly been employed in the fabric department of Wheeling-Pittsburgh Steel and later retired from Bituminous Coal Research. Survivors include his loving and devoted wife of 57 years, Martha Soroka Zeli, two sons and a daughter-in-law; Ronald and Christine Zeli, of Perryopolis, and Mark Zeli, of Boise, ID, two daughters and sons in-law; Karen and Doug Martin, of Hershey, and Tricia and Tony Bertram, of Belle Vernon, seven grandchildren; Zachary Zeli, of Nashville, TN, Eric and Jessica Nicole Zeli, both of Boise, ID, Joshua and Larissa Martin, both of Hershey, PA, and Anthony and Vienna Bertram, both of Belle Vernon, a brother and a sister in-law; Robert and Joyce Zeli, of Charleroi, and three sisters in-law and two brothers in-law; Gloria Zeli, of Speers, Vera and Tony Trona, Bill Evansky, and Stevanna Lis; and several extended family members including Doris Zeli, nieces, nephews and Elsa Zeli. In addition to his parents, he was preceded in death by a brother, Raymond Zeli, and a close cousin, Vincent Zeli. The family would like to extend their gratitude and appreciation to Kathleen Braddock, the Administrator, and the entire staff at Nevaeh Cove Personal Care Home for their compassion and loving care for Tex when he was in residence. Also, to Dr. Lauren Ayersman and VITAS Hospice group. Friends will be received on Friday from 4 to 8 P.M. in the Ferguson Funeral Home and Crematory, Inc., 700 Broad Avenue, Belle Vernon. 724-929-5300 www.FergusonFuneralHomeAndCrematory.com Funeral services will be in Holy Resurrection Orthodox Church of Belle Vernon at 1 P.M. Saturday with Father Samuel Smolcic officiating. Interment will follow in Belle Vernon Cemetery. Parastas services will be in the funeral home on Friday at 7 P.M. In lieu of flowers, memorial donations may be made to Holy Resurrection Orthodox Church.

Ronald Anthony "Tex" Zeli, 83, of Belle Vernon, went peacefully to be with the Lord on Wednesday, July 12, 2017. A son of the late Anthony and Mary (Uveges) Zeli, Tex was born in Belle Vernon on June 16, 1934. He was a member of the Holy Resurrection... View Obituary & Service Information

The family of Ronald Anthony "Tex" Zeli created this Life Tributes page to make it easy to share your memories.

Send flowers to the Zeli family.