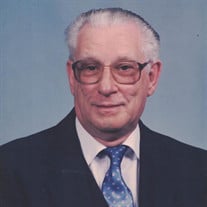 Roy J. Herron, 95, of Rostraver Township, Belle Vernon, went peacefully to be with his Lord and Savior on April 30, 2022 with his wife by his side in Dunlevy Manor Personal Care Home where he was a resident for three months. He was a graduate of Charleroi High School and retired from Allenport Steel Mill in 1988. He proudly served his country in the U.S. Army in WWII from 1944 – 1946, being a technician 4th grade, company A, 17th armored infantry battalion, 12th armored division, receiving the Army of Occupation Medal (European, African, Middle Eastern Campaign), also receiving a good conduct medal and World War II Victory Medal. Roy was born in Elco on June 10, 1926, the son of the late Francis R. Herron and Idesta Craven Herron. He enjoyed reading, always starting his day by reading his bible and having his morning devotions, then reading the local newspaper, keeping up with all the news. He always enjoyed gardening, and then sharing whatever he planted with family, friends, and neighbors. Roy was a fan of the Pittsburgh Pirates and the Steelers and played on several ball teams in his younger years. Roy also occasionally enjoyed a game of dominoes and enjoyed listening to Gospel Music and Eddy Arnold. He was a hard worker, never wanted to give up doing anything, but when he got older and couldn’t drive, walk, and his eyes began to fail, he still tried his best to read his Bible. He was a man of few words, but when he spoke it was worth hearing. With his quiet, caring personality, he gained many friends through the years, always thought of others before himself. He was a 11-year cancer survivor and survived other surgeries and physical issues through the years, always giving God the praise for his recoveries. He attended the Nazarene Church for many years where he worked in the Sunday School Office for over 30 years. Roy was known for always being on time, never wanting to be late, especially for church or work. In addition to his parents, he was preceded in death by three sisters, Dorothy V. Giffin, Velma E. Wallace, and Rebecca (Betty) Herron; two brothers-in-law, William Giffin and Daniel W. Wallace, Jr.; and one niece, Nancy E. Wallace. He is survived by the love of his life, his wife of 21 years, Margaret Ann Dietz Herron; one nephew, James Giffin and wife Monica, and several cousins. He is gone from here, but will always remain in the memory and hearts and will greatly be missed by his wife, cousins, and many special friends who God has blessed him with through the years. Loved by many, missed by many who loved him dearly, he is now enjoying Heaven where he will join all his family and friends who have gone on before. Now safe in the arms of Jesus. Friends will be received on Tuesday, May 3, 2022 from 2 to 4 P.M. and 7 to 9 P.M. in the Ferguson Funeral Home and Crematory, Inc., 700 Broad Avenue, Belle Vernon. 724-929-5300. www.FergusonFuneralHomeandCrematory.com. Funeral services will be held on Wednesday at 10 A.M. in the funeral home with Pastor Patti Smith officiating. Interment will follow in Mon Valley Memorial Park.

Roy J. Herron, 95, of Rostraver Township, Belle Vernon, went peacefully to be with his Lord and Savior on April 30, 2022 with his wife by his side in Dunlevy Manor Personal Care Home where he was a resident for three months. He was a graduate... View Obituary & Service Information

The family of Roy J. Herron created this Life Tributes page to make it easy to share your memories.

Send flowers to the Herron family.