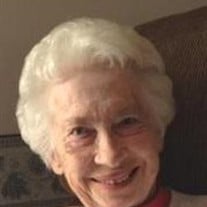 Ruth Elizabeth Arnold Wells, 85, of Lynnwood, went to be with the Lord on Tuesday, April 8, 2014, Justine’s Personal Care Home in Roscoe. She was born in Washington, PA on December 24, 1928 to the late Lindsay and Eunice Smith Arnold. Ruth grew up in Wellsburg, WV and lived in various places until finally settling down in Lynnwood in 1952 to raise her family. Ruth graduated from AGH School of Nursing in 1949 and was employed as an RN at Havencrest Nursing Home. She was a member of the Mon Valley Nurses Club, was a volunteer on C.A.S. (what is now known as the Rostraver/West Newton Ambulance Association), was an usher at the Benedum Center, and was a member of the Fayette City Methodist Church for the past 40 years. In addition to her parents, she was preceded in death by her husband, Dr. Samuel J. Wells, D.M.D on March 10, 1994. She is survived by four sons and two daughters-in-law, Edwin Wells, D.D.S. and Desiree Wells of Fayette City, Sam and Barbara Wells of Rostraver, Jim Wells of North Belle Vernon and Bob Wells of Severna Park, MD; a daughter, Laura Wells of Fayette City; nine grandchildren and five great grandchildren. Friends will be received on Thursday from 7-9 p.m. and on Friday 2-4 and 7-9 p.m. at the Ferguson Funeral Home and Crematory, Inc. (724-929-5300), 700 Broad Avenue, Belle Vernon. www.FergusonFuneralHomeAndCrematory.com. A Funeral service will be held in the funeral home on Saturday at 10 A.M. with Pastor Vann Walchock officiating. Interment will follow in Belle Vernon Cemetery.

Ruth Elizabeth Arnold Wells, 85, of Lynnwood, went to be with the Lord on Tuesday, April 8, 2014, Justine&#8217;s Personal Care Home in Roscoe. She was born in Washington, PA on December 24, 1928 to the late Lindsay and Eunice Smith Arnold.... View Obituary & Service Information

The family of Ruth Elizabeth Arnold Wells created this Life Tributes page to make it easy to share your memories.

Ruth Elizabeth Arnold Wells, 85, of Lynnwood, went to be with...