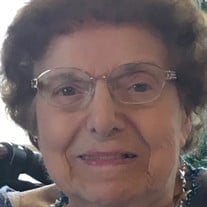 Ruth B. Gray, 97, of North Belle Vernon, passed away on Thursday, March 21, 2019 in Mon Valley Hospital. A daughter of the late Armand and Josephine Franchini Brizzi, she was born on November 25, 1921 in Dunlevy, where she resided for 62 years until moving to North Belle Vernon in 1983. She was a 1939 graduate of Charleroi High School and graduated from Feuster’s Beauty School in 1940. A member of the former Dunlevy Evangelical United Brethren Church, Ruth originally joined as a Cradle Roll Member, and continued her membership there for 42 years. In 1963, she joined the Charleroi First United Methodist Church, of which she is still a member. Ruth had been employed as the secretary of Dunlevy Borough Council, and then of the Charleroi First United Methodist Church for 27 years, serving under five pastors before retiring in 1997. She was active in many capacities, one of which was that she helped to structure the Lincoln Avenue Nursery School of the church. One highlight of her career was to serve as secretary to an exchange pastor from England in 1976. She is survived by two daughters and sons in-law, Diane and Richard Molloy and Karen and Ken Watson; a son and daughter in-law, Kenneth P. and Janice Gray, six grandchildren, Dara (Ryan) Friedman, Erin (Alex) Tighe, Bonnie Waddell, Joshua (Angie) Gray, Jesse Gray and Ryan Gray and Ashley; and six great-grandchildren, Cameron and Nathan Friedman, Eleanor and Otis Tighe, and Savannah and Owen Gray. In addition to her parents, she was preceded in death by her husband, Robert T. Gray on September 18, 1998 with whom she shared 57 cherished years of marriage; a grandson, Michael Waddell, three brothers, Carl, Jess, and Elio Brizzi; and two sisters, Leonetta Brizzi in infancy and Irma Brizzi Haut. Ruth was the last surviving member of her family. Friends will be received on Thursday, March 28, 2019 from 2 to 4 P.M. and 7 to 9 P.M. in the Ferguson Funeral Home and Crematory, Inc., 700 Broad Avenue, Belle Vernon. 724-929-5300 www.FergusonFuneralHomeAndCrematory.com Funeral services will be held on Friday at 12:30 P.M. with Chaplain Dr. Paul Spence officiating. Entombment will follow in Belle Vernon Cemetery. In lieu of flowers, donations may be made to the Dunlevy United Methodist Church or the Charleroi First United Methodist Church in Ruth’s name.

Ruth B. Gray, 97, of North Belle Vernon, passed away on Thursday, March 21, 2019 in Mon Valley Hospital. A daughter of the late Armand and Josephine Franchini Brizzi, she was born on November 25, 1921 in Dunlevy, where she resided for 62 years... View Obituary & Service Information

The family of Ruth B. Gray created this Life Tributes page to make it easy to share your memories.

Send flowers to the Gray family.