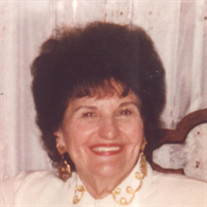 Sophia J. (Radock) Cutter, 90, of Belle Vernon, passed away on February 16, 2016. Born on April 21, 1925, she was the daughter of the late Nicholas and Pauline (Radich) Radock of Fairhope. She was a member of St. George Serbian Orthodox Church in Masontown. She was a lifelong resident of the Belle Vernon area, having lived in Fairhope, Lynnwood, and North Belle Vernon. More recently, she was a resident of Mt. Macrina Manor in Uniontown. She is survived by her daughters and their husbands, Vicki C. and Donald Beckman of Rostraver Twp. and Lorri Jo and Richard Kujawski of Speers; granddaughter and husband, Dr. Erika Leigh and Brian Buchanan of Squirrel Hill; grandson and wife, Jacob and Jennifer Kujawski of Rostraver Twp.; and two great grandchildren, Ronin Thomas Buchanan and Addison Marie Kujawski. Also surviving are her brother and his wife, Charles and Alice Radock of Wexford; sister, Paulette Radock of Fairhope; sister-in-law Rita Radock of Belle Vernon, as well as numerous nieces, nephews, and cousins. In addition to her parents, she was preceded in death by her husband of 50 years, Norbert Roy Cutter of Monessen, as well as five brothers, Michael, Joseph, Richard, George, and Steve. Sophia graduated from Marion High School in 1943 and attended Westminster College and the Mercy Hospital School of Nursing before serving on the Nurse Cadet Core. She was employed for many years as an assistant with Erni’s Dance Studio in Monessen and worked as a teacher’s aide with the Belle Vernon Area School District from 1967-1976. She enjoyed her life as a homemaker and liked decorating, cooking, and baking. She also loved to dance and read and enjoyed card clubs and going to casinos. Of most importance to her was her family with whom she shared numerous precious and loving memories. Friends will be received from 2 to 4 P.M. and 7 to 9 P.M. Thursday in the Ferguson Funeral Home and Crematory, Inc., 700 Broad Avenue, Belle Vernon. 724-929-5300 www.FergusonFuneralHomeAndCrematory.com There will be a Pomen service in the funeral home on Thursday at 7 P.M. Funeral services will be in the funeral home at 10 AM Friday with Very Rev. Dr. Rodney Torbic officiating. Interment will be in Belle Vernon Cemetery.

Sophia J. (Radock) Cutter, 90, of Belle Vernon, passed away on February 16, 2016. Born on April 21, 1925, she was the daughter of the late Nicholas and Pauline (Radich) Radock of Fairhope. She was a member of St. George Serbian Orthodox Church... View Obituary & Service Information

The family of Sophia J. Cutter created this Life Tributes page to make it easy to share your memories.

Send flowers to the Cutter family.