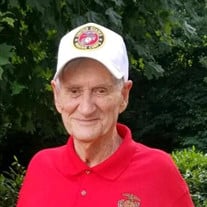 Stephen S. Nichol, Jr., 90, formerly of Belle Vernon, passed away on September 2, 2018 in the Hospice Home, Burlington, NC. A son of the late Stephen S. and Louise Steinmiller Nichol, he was born in Marianna on July 3, 1928. A former member of the First Presbyterian Church of Belle Vernon, he had resided for most of his adult life in North Belle Vernon until moving to Georgia in 1990. In 2016, he moved to North Carolina to be near his family. Stephen retired in 1984 from the Monessen Southwestern Railroad as an engineer. He served in the U.S. Marines during the Korean War. Survivors include two daughters and sons-in-law, Donna and Robert Corey of Charlottesville, VA and Barbara and Chuck Dusick of Cape Coral, FL, three sons and two daughters-in-law, Stephen R. and Lois Nichol of Mebane, NC, Jeffrey and Charlotte Nichol of Raleigh, NC and Mark Nichol (fiance, Anna Karasik) of Pasadena, MD, six grandchildren, Brandy (Sean) Eichmann, Krystal (Michael) Downing, Thomas Corey, Erik (Teka) Corey, Amanda (Kyle) Donnar and Bradley Dusick; six great grandchildren, James and Charlie Deacon, Brooks and Summerlyn Downing, Theo and Tilly Corey, and several nieces and nephews. In addition to his parents, he was preceded in death by his wife, Hazel Shipley Nichol on April 18, 1988, two sisters, Catherine Huscroft and Doris Lehr and one brother, Samuel Nichol. Friends will be received from 7 to 9 P.M. on September 6, 2018 in the Ferguson Funeral Home and Crematory, Inc., 700 Broad Avenue, Belle Vernon. www.FergusonFuneralHomeAndCrematory.com 724-929-5300. Funeral services will be in the funeral home on September 7, 2018 at 10 A.M. with Rev. Suzanne Currie officiating. Interment will follow in Belle Vernon Cemetery. Donations can be made in his memory to Hospice Home, 918 Chapel Hill Road, Burlington, NC 27215

Stephen S. Nichol, Jr., 90, formerly of Belle Vernon, passed away on September 2, 2018 in the Hospice Home, Burlington, NC. A son of the late Stephen S. and Louise Steinmiller Nichol, he was born in Marianna on July 3, 1928. A former member... View Obituary & Service Information

The family of Stephen S. Nichol Jr. created this Life Tributes page to make it easy to share your memories.

Send flowers to the Nichol family.