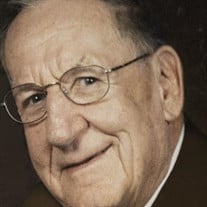 Steve Lovasic, 91, of Washington Township (Fairhope), passed away on Friday, April 5, 2019 at home, peacefully surrounded by his family. He was born on Sep. 23, 1927 in West Brownsville, son of the late Josip and Anna Androvich Lovasic. He was proceeded in death by an infant sister Bertha, brother Joe of Glassport, and sister Helen (Hadden) of West Brownsville. He is survived by his beloved wife of 62 years, Catherine J. Letrick, a son Steven Lovasic of Belle Vernon, and Sharon (Paul) Bisio of Lansdale Pa. In addition, he is survived three grandchildren Alyssa (David Binck) of Bethel Park, Vicki Bisio of Hong Kong, and David Bisio of Pittsburgh, and one great grandson Harrison Binck. After graduation from Brownsville High School, Steve enlisted in the US Navy during World War II where he served as a radioman aboard the heavy cruiser USS ST. PAUL (CA-73), flagship of the US Seventh Fleet. He finished his tour as part of the nuclear weapons test program at Eniwetok Atoll in the Marshall Islands, and onboard the battleship USS IOWA (BB-61). After WW II, he graduated from Central Technical Institute in Kansas City, Missouri as a studio and transmitter engineer. He was recalled to active military duty for the Korean conflict and served as a transmitter engineer and watch supervisor of the Navy’s largest transmitter in Hawaii. He worked for Westinghouse at the Bettis Atomic Power Laboratory in West Mifflin Pa. for 37 years from 1956 to 1993. Steve worked to design, develop, and test reactor plant control systems for the US nuclear navy. He directed operation of the mechanism lab for 20 years. He traveled to many shipyards to service nuclear surface ships and submarines. He was also involved in underwater explosion and vibration testing while at the Laboratory. Steve enjoyed ham radio, wood working, gardening, and traveling with his wife Catherine. Steve traveled extensively visiting forty-nine of fifty states, seven Canadian provinces, over thirty foreign countries, and many Pacific Islands. Steve was a Mason for over 50 years and member of Tri-County Lodge No. 252. He served as worshipful master of the Belle Vernon Lodge No. 643 in 1974 and as lodge secretary for twenty-nine years. He was also a member of the Uniontown Lodge of Perfection, Tall Cedars of Lebanon No. 138 in McKessport, a life member of the Belle Vernon VFW Post No. 699, Belle Vernon American Legion Post No. 0659, and a 50+ year member of the Croatian Fraternal Union. Friends will be received from 2 to 4 and 7 to 9 P.M., on Sunday in the Ferguson Funeral Home and Crematory, Inc., 700 Broad Avenue, Belle Vernon. www.FergusonFuneralHomeAndCrematory.com 724-929-5300 A funeral service will be in held in the funeral home on Monday at 10 A.M. with Pastor Timothy Dawes officiating. Interment will follow in Belle Vernon Cemetery. The members of Tri County F. & A. M. Lodge 252 will meet in the funeral home to hold services at 7:30 P.M. Sunday.

Steve Lovasic, 91, of Washington Township (Fairhope), passed away on Friday, April 5, 2019 at home, peacefully surrounded by his family. He was born on Sep. 23, 1927 in West Brownsville, son of the late Josip and Anna Androvich Lovasic.... View Obituary & Service Information

The family of Steve Lovasic created this Life Tributes page to make it easy to share your memories.

Send flowers to the Lovasic family.