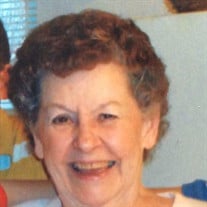 Thelma Marie Stulock, nee Halechko, 87, died March 1, 2017, at home in Monongahela. Born September 12, 1929, in Ella Hollow, Thelma was the middle of five children born to the late Frank and Esther Hines Halechko. Thelma attended primary and high schools at Monongahela, where she showed both interest and aptitude in mathematics. After graduating in 1948, she went to work in the bookkeeping department at the Ford auto dealership in Monongahela. Thelma later worked as a bookkeeper in Pittsburgh and for the Frank Pizzica car dealership in Monongahela. As a young woman, Thelma loved to go dancing with her girlfriends, especially her longtime best friend Grace McGinty Holod. Jitterbug was Thelma's favorite dance, and she particularly enjoyed the social dances at various Mon Valley ethnic clubs as well as the dance hall at Kennywood Amusement Park in Pittsburgh. In 1953, she married Steven Peter Stulock of West Newton, with whom she had two sons, Stephen Frank and Kenneth Lee. She and Steve loved dancing, and spending weekends with family and friends at their mountain residence near Mount Davis, PA. She was a longtime member of the former Transfiguration Roman Catholic Church (currently St. Damien of Molokai). Thelma loved to play cards with her siblings and friends, and her home on Fourth Street was the regular meeting place for their weekend evening gatherings. During the 1980s, Thelma babysat half a dozen preschoolers before she returned to the workplace at Cox Market in Monongahela. For the past 23 years, she worked as a clerk for Span & Taylor Drug company in Monongahela where she loved seeing friends and neighbors each week. In addition to being an enthusiastic recreational dancer, Thelma was known for her wonderful holiday nut rolls, which she baked annually through the 2016 holiday season, even as her health declined. Family and friends near and far anticipated and delighted in Thelma's beloved nut rolls. Thelma was pre-deceased by her parents, her husband in 1971, her oldest sister and next-door neighbor Martha Beck in 2008, a sister-in-law, three brothers-in-law, and several nephews. She is survived by her sons, Stephen (and Kaia) Stulock of Littleton, CO; Kenneth (and Sylvia) Stulock of Belle Vernon; granddaughters Sydney and Gretchen Stulock of Denver and Littleton, CO, respectively; and grandsons Steven and Nolan Stulock of Pittsburgh and Belle Vernon, respectively. Additional survivors are her older sister Alma "Bebe" Fetch of Monongahela, younger sister Geraldine Matesick of Clearwater, FL, brother Frank (and wife Joyce) Halechko of Monongahela, and special friend and colleague Kim Hans of Monessen. A funeral mass will be held 10:00AM Saturday, March 4th at St. Damien of Molokai Roman Catholic Church, Main Street, Monongahela. Private interment will follow at Monongahela Cemetery at a later date. In lieu of flowers, donations may be made to St. Damien of Molokai food pantry or The American Cancer Society. Arrangements are in care of The Ferguson Funeral Home and Crematory, Inc., (724-929-5300), 700 Broad Avenue, Belle Vernon. www.FergusonFuneralHomeAndCrematory.com

The family of Thelma M. Stulock created this Life Tributes page to make it easy to share your memories.

Send flowers to the Stulock family.