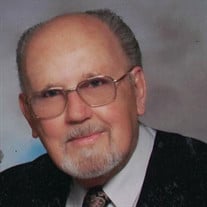 Thomas (Tom) Stefan, 93, of North Belle Vernon, passed away on Saturday, April 2, 2022. A son of the late John and Susan Staryarsky Stefan, he was born on December 2, 1928 in North Belle Vernon. Tom enlisted in the Army before the Korean War. He was an accomplished trombone player and assigned to the Second Army Band at Fort Meade, MD. The band covered 7 states. At that time, the disembarkment point for the Korean War was California and soldiers were shipped out by train. One of the Second Army’s jobs was to play for the departing soldiers. One of the songs they played was “California Here I Come”. This song was not usually received fondly by the troops going into harm’s way. Tom remembers them cursing at the band, spitting at them, and hurling objects. After the war, he had the privilege of playing with the Tommy Dorsey Orchestra as a fill in trombonist. While in the Army, Tom noticed a lot of bad haircuts. He thought how hard could that be, so he tried to give a haircut to one of the other Second Army Band members. It was pretty good and Tom turned out to be the unofficial barber for the Second Army Band. It was a moment that ended up serving him well, because that ended up being his chosen profession, a barber. Tom got out of the Army in 1952. He worked at several different jobs until 1954, but was never good at working for someone else. He fell back on his experience in the Army cutting his band mates’ hair and got his barber’s license. He opened Stefan’s barber shop in Donora in 1954. Tom also was an entrepreneur and operated several different businesses over the years. In 1964, he started the Continental Bar which was a shot and beer bar which served hardworking steelworkers. In 1978, he started Continental Catering. The business did well and he had the pleasure of providing several young men and women with their first job. Demand for catering fell off when the mills shutdown. In 1990, he returned to being a barber again, cutting hair until he was 91, charging $1.00 for a haircut and $11.00 for philosophy. He had his ups and downs, but had a life well lived. Survivors include his wife of over 70 years, Dorothy Stefan, two sons and daughters-in-law, Jeffrey and Tracy Stefan and Gregory and Clare Stefan, and six grandchildren. In addition to his parents, he was predeceased in death by his brother, John and his granddaughter, Erika. A funeral liturgy will be celebrated in his honor at Saint Mary’s Byzantine Catholic Church of the Assumption, 125 McKee Avenue, Monessen, PA 15062 on Saturday, April 9, 2022 at 10 A.M. with Rev. Stephen J. Wahal as celebrant. Arrangements have been entrusted to the Ferguson Funeral Home and Crematory, Inc., 700 Broad Avenue, Belle Vernon. 724-929-5300. www.FergusonFuneralHomeandCrematory.com.

Thomas (Tom) Stefan, 93, of North Belle Vernon, passed away on Saturday, April 2, 2022. A son of the late John and Susan Staryarsky Stefan, he was born on December 2, 1928 in North Belle Vernon. Tom enlisted in the Army before the Korean War.... View Obituary & Service Information

The family of Thomas Stefan created this Life Tributes page to make it easy to share your memories.

Send flowers to the Stefan family.