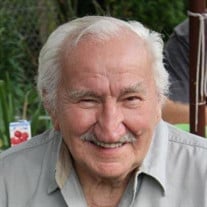 Walter ‘Walt’ Frank Marchewka, 94, formerly of Belle Vernon (Redtown), passed away peacefully on Saturday, November 20, at Uniontown Hospital following a brief illness. Walt was born into a large family on March 3, 1927, in Monessen, the son of the late Walter and Bernice Marchewka. A 1945 graduate of Monessen high school, Walt served his country as an MP at the end of World War 2. He then went on to work at Page’s Wire Mill and as a mechanic in a few garages in the Mon Valley. In the 1960’s, he opened his own garage, Walt’s Auto Repair and serviced customer’s vehicles for 30 years. On April 15, 1966, he married Patricia Swartz. He adopted her 3 children and then were blessed with 3 more sons. They were married for 22 years until her passing in 1989. Walt enjoyed camping, cooking, gardening and was skilled at woodworking. Friends and family would often receive gifts of the things he made. Being a mechanic by trade, Walt never had a problem he couldn’t solve. He belonged to the Belle Vernon Russian Club, the Belle Vernon Moose, and Hungarian Club of Pricedale, where he was a beneficial member for 63 years. His biggest joy in life was spending special moments with his family. Surviving to cherish his memory are his children; Stephen (Heather) Marchewka of White Oak, Laurie (Bob) Duvuvei of North Charleroi, Walter “Boo” (Maureen) of Jefferson Hills, Joel “JP” (Amber) of Mt Lebanon and Shawn (Terri) of Charleroi. Grandchildren; Heather (Brian) Fisher, Jason (Michelle) Marchewka, James Gwynn, Curtis Gwynn, Gail (Bob) Powell, Lee (Melanie) Gauden, Jesse Duvuvei, Brandi Duvuvei, Samuel Marchewka, Parker Marchewka, and Simon Marchewka. Walt will also be forever remembered by his numerous nieces, nephews, extended family and friends. In addition to his wife and parents, Walter is preceded in death by; siblings Marion “Curly” Marchewka, Harry Marchewka, Edward Marchewka, Sophie Kusenko, Sabina Dzimiera, Emily Matta and Bernice Lewandowski. a daughter, Karen Gauden and son-in-law, Les Gauden. Friends will be received from 2 to 4 and 7 to 9 P.M. Tuesday in the Ferguson Funeral Home and Crematory, Inc., 700 Broad Avenue, Belle Vernon. www.FergusonFuneralHomeAndCrematory.com 724-929-5300. Funeral services will be in the funeral home on Wednesday at 10 A.M. with Bill Weightman, Pastor of the Laurel Hill Presbyterian Church officiating. Interment will follow in Belle Vernon Cemetery. The family would like to extend their gratefulness to the staff at the Residence of Whitehall for their loving care to Walter.

The family of Walter 'Walt' Marchewka created this Life Tributes page to make it easy to share your memories.

Send flowers to the Marchewka family.