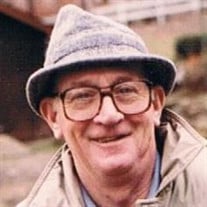 William (Bill) Holmes Kegg, 92, left this world peacefully on April 16, 2016, at home in Kent, Ohio surrounded by his loving family. Bill volunteered for and served in Europe in the Army 8th Air Force during World War II and was a Disabled Veteran. He was truly one of America’s “Greatest Generation”. He was employed as a Machinist by the Wheeling Pittsburgh Steel Corporation for 41 years. Bill had legions of friends throughout his long and well lived life and few, if any, enemies. He was a great son, brother, soldier, husband, father, grandfather, father-in-law and a humanitarian in the truest sense of the word. The world is a better place as a result of his tenure here on this planet. He identified with the underdog, as he often found himself in that situation. Always the care giver, he cared for his young wife during a long and difficult battle with cancer that claimed her at the age of 42 along with other family members. Bill was a 32nd Degree Mason and a lifelong member of the Scottish Right Uniontown Pennsylvania Lodge. He enjoyed hunting and fishing, politics, anything to do with airplanes or flying and reading books-----lots of books. He simply adored his grandchildren. Bill is survived by his son and daughter in law, Jeff and Penny; grandchildren Sarah & Hannah (aka Golden Nuggets) and Hayden (aka The Rock); sister, Faye Vercamen; niece, Kim Black and two nephews, Reid Vercamen and William (Chubby) Higginson. He was proceeded in death by his loving wife Alberta; father, Roy Kegg; mother Margaret (Madge) Kegg; sister Shirley Shannon; brother, RJ, who died in infancy; and long time companion Rose Atkins. Friends will be received at the Wood-Kortright-Borkoski Funeral Home, 703 E. Main St., Ravenna, Ohio on Wednesday, April 20, 2016 from 5:00pm until the 7:00pm Celebration of Life service with Father James Lang officiating. Interment will take place at Maple Creek Cemetery, Fallowfield Township on Sunday, April 24, 2016. Condolences and memories may be shared at www.wood-kortright-borkoski.com. Thanks to the Absolute Hospice team who went above and beyond in every respect; with a special thank you to Becky, Lori and Mark. (Wood-Kortright-Borkoski 330-296-6436)

William (Bill) Holmes Kegg, 92, left this world peacefully on April 16, 2016, at home in Kent, Ohio surrounded by his loving family. Bill volunteered for and served in Europe in the Army 8th Air Force during World War II and was a Disabled... View Obituary & Service Information

The family of William Holmes Kegg created this Life Tributes page to make it easy to share your memories.

Send flowers to the Kegg family.