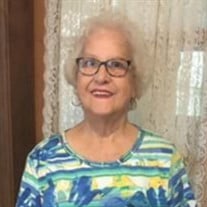 Wilma A. Gargan, 80, died Thursday, March 11, 2021, after a brave 5 year fight with cancer in her Fayette City home with her husband and family by her side. A daughter of the late George and Anna George Grados, she was born in Fayette City on May 7, 1940. A lifelong resident of Fayette City, she was a member of St. Sebastian R.C. Church of Belle Vernon and the former St. Eusevius R.C. Church and Holy Spirit R.C. Church, both of Fayette City, and retired from Dr. James Solan’s office in 2000. Wilma was active in several Card Clubs, and loved traveling with her beloved husband. She was a loving wife, mother, grandmother, and great grandmother, known to her family as Mimi and “Bubba”. Survivors include her husband of 60 years, John M. ‘Jack’ Gargan, a daughter and son-in-law Amy and Michael Wilson of Kennewick, WA, two sons and daughters-in-law, John and Cyndi Gargan of Rostraver and Ryan and Kelly Gargan of Elizabeth; seven grandchildren, Zack (Haley) Gargan, Matt (Carly) Gargan, Jesse, Jon and Jack Wilson, and Sean and Grace Gargan; four great grandchildren, Reid and Mabel Gargan and Summer and Kellan Gargan; three sisters, Joan (Leonard) Lucas of Belle Vernon, Christine (Bill) Cheves of Cypress, TX, and Georgette (John) Gulya of Monessen; and a lifelong friend, Ellie Davis of Fayette City. In addition to her parents, she was preceded in death by a sister, Helen Farro and a brother, Charles Grados. Friends will be received 2 to 4 and 6 to 8 P.M. Sunday in the Ferguson Funeral Home and Crematory, Inc., 700 Broad Avenue, Belle Vernon. 724-929-5300. www.FergusonFuneralHomeandCrematory.com. Everyone is asked to go directly to St. Sebastian Roman Catholic Church for a Funeral Mass at 10 A.M. Monday with Fr. Michael Crookston as celebrant. Face masks are required in the funeral home. Interment will be in the National Cemetery of the Alleghenies. Donations may be made to the Cancer Institute at Jefferson Regional Medical Center, 575 Coal Valley Road, Jefferson Hills, PA 15025 412-362-8677

Wilma A. Gargan, 80, died Thursday, March 11, 2021, after a brave 5 year fight with cancer in her Fayette City home with her husband and family by her side. A daughter of the late George and Anna George Grados, she was born in Fayette City... View Obituary & Service Information

The family of Wilma A. Gargan created this Life Tributes page to make it easy to share your memories.

Send flowers to the Gargan family.